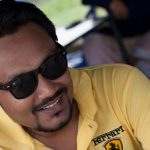 ‘I had no interest in music. As a child, I used to say, I will be a doctor/engineer. I was very naughty. I was also a second division cricketer then, but somehow music was on my blood.

Prince Mahmud Arnab at a glance

 Receipt: People know me by my name.

Arnab is still unknown. The first opportunity comes from singing in a drama title music. He said, ‘One of my friends offered me as fun to sing for his upcoming drama. But after giving the voice, he said, it was wonderful and he again asked me to sing for his next drama also. After that I again started practicing with my guitar and I was trying to creating some of my own song with my old write ups.

Arnab is an IT professional. In his career he has developed lot of well-known websites of Bangladesh. Recently he is totally on focus of Music and he is trying to bring his singing career forward.

Posted in LifeStyle | Comments Off on Prince Mahmud Arnab, a promising musician of Bangladesh